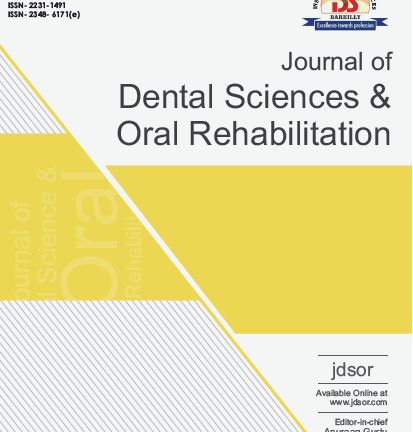 Background: Oral cancer is the most common cancer in India, and tongue is one of the most frequently affected sites in
young people with rising prevalence in all. In many countries, the prevalence of intraoral cancer appears to be increasing,
particularly in younger people. Although the quantitative relationship is equalizing, malignant neoplastic disease affects males
several times more often than females, and in recent times, raised cases are being identified jointly as young females in
older women. However, the prevalence of oral squamous cell carcinoma (SCC) is growing in individuals below the age of
40 years. Aims and Objectives: The aim of the study was to find out the prevalence, histopathology grading, and tumor,
nodes, and metastases (TNM) stage of the SCC involving tongue among the young patient’s with the objective being to
find out the prevalence of tongue SCC at the particular anatomic sites, age group, gender, and associated habits, at tertiary
academic medical center in Bareilly population over the period of 5 years. Materials and Methods: The current retrospective
research was conducted by analyzing the medical history of pathologically confirmed oral tongue SCC cases diagnosed at a
tertiary academic medical center in the area of Bareilly from January 2014 to December 2019. The patients were divided into
two age categories: Older (over 40 years of age) and younger (ages 40 and below). Data were contrasted between the two
groups associated with tongue carcinoma prevalence, associated habits, tumor and histopathological features, and node and
metastases grading. Results: The findings showed that, out of 137 (27.9%) cases of tongue SCC cases, 78 (56.9 %) (58 males
and 20 females) SCCs of tongue cases were found in young patients and 59 (43.1%) (41 males and 18 females) SCCs of tongue
cases were determined in older patients with male predominance in both age groups. The majority of cases in young age group
showed significant mixed habits, moderately differentiated grade and 47 cases were presented at advanced clinical stage of
TNM (III and IV), while only 31 cases were presented at early stage (I and II). Conclusion: SCC of the tongue could also be
related to a variable clinical course in younger patients. While the disease-specific outcome is typically analogous to that of
older patients, there is an unusually aggressive disease in some patients. In addition to providing instructions on the treatment
regimen to be followed in each case of oral SCC, tumor, node, and metastasis grade of malignant tumor (TNM grade) has been
used for several years to predict the prognosis and survival of carcinoma patients, such that early diagnosis and prevalence of
carcinoma helps to increase the quality and quantity of lifespan of the patients.

Aim and Objective: The aim of the study was to determine the prevalence and types of jaw pathologic findings as detected
in panoramic radiographs of a sample of young women visiting Institute of Dental Sciences, Bareilly (Uttar Pradesh) and to
evaluate the most common factors that predict the occurrence of jaw pathologic findings. Materials and Methods: A total
of randomly selected 200 orthopantomograms of the young female patients from the archived from the Department of Oral
Medicine and Radiology, Institute of Dental Sciences, Bareilly, India, will be evaluated. Types of pathologic radiographic
jaw findings and their prevalence were determined through screening of panoramic radiographs. Data were analyzed using
the statistical analysis software (SPSS version 22 [IBM Corp.]). Multiple linear regression formula was used to explore the
significance of some types of dental lesions as predictor variables for the occurrence of jaw pathologic findings. Results: In
the present study, 85% of study sample had periapical lesions. Total number of retained roots was 34%. Alveolar bone loss
was found to be less significant (6%). When talking about the supernumerary teeth, total of 11% was found. In 57% of the
panoramic radiographs impacted teeth were found. Conclusion: According to the results of the present study, it could be
concluded that there is poor oral hygiene among the young women with increased risk of perapical lesions and the needed
proper measures to counteract such issues.
Key words: Radiographic findings, Jaw pathologies, Alveolar bone loss, Periapical lesions

Coronavirus disease (COVID)-19 is a pandemic disease, declared by the WHO in March 2020. This disease was seriously
affecting the lungs and immune system of the body. Hence, many studies were done to make a clear treatment modality for
the same, but no proper treatment is described till date. We all have to learn living with this until a proper treatment modality
comes out. Here, we are describing the new normal dental practice and precautionary measurements to deal with pandemic,
severe acute respiratory syndrome coronavirus 2 (COVID-19).
Key words: COVID, Dental practice, Guidelines

The All-on-4 Implants Concept: A Review and Update

Implant placement is a challenge in the deficient bone mass in maxilla and mandible. If the available bone is reduced, then
esthetics is challenged. The ideal implant position should be considered in all three dimensions: Mesiodistal, apicocoronal,
and orofacial. In DBM condition, All-on-4 implant concept may be the answer whenever patient is motivated for fixed full
mouth rehabilitation as implant-supported fixed prostheses. All-on-4 implants concept, four implants are placed anteriorly. The
current article is a review and update article over the same and it will reveal the planning protocol, consideration of salient
factors, and surgical and prosthetic protocol. In summary and conclusion, this concept eliminates the need of sinus lift and
grafting, damage of mental nerve, indication for design for manufacturability type of bone, and cost effective. It also reduces
the period of edentulism.
Key words: Deficient bone mass, Implant-supported fixed prostheses, Crown height space

Azithromycin, a macrolide has been used broadly in medicine in the treatment of an extensive array of diseases which includes
middle ear infections, upper respiratory tract infections and also sexually transmitted infections. Its effectivity against most
common periodontopathogens has been studied in detail. This drug could play a triple fold role for the resolution and treatment
of diseases of the supporting structures of the tooth. High concentrated levels of the drug have been reported in neutrophils,
macrophages and even ﬁbroblasts, which are considered as prime players in the pathologic process of periodontal diseases.
With the advent of increasing research regarding periodontal therapy the future could bring further confirmation of these
properties, and azithromycin can become a treasured host-modulator for treating periodontal diseases. Thus, this review will
explore on possible roles of azithromycin for treating periodontal diseases.
Key words: Antimicrobial, azithromycin, macrolide, periodontal disease

The Advent of the Compression Dome Concept

A detailed understanding of the histoanatomic structures and active interaction of the natural dentition provides dentists with
the optimum decisive advantage with regard to fabrication of the final restoration. The article attempts to provide an overview
of the protective structure naturally present in the tooth. The concept of a “peripheral rim of enamel” and the manifestation
of compressive and tensile fractures within the peripheral rim of enamel and dentin has been described. Enamel acts as a
stress distributor. The load is transferred to the root vertically and horizontally to the crown by means of the dentinoenamel
junction. A DEJ is a thicker zone that undergoes greater stress than the central coronal dentin. The conventional cavity designs
are disharmonious with the tooth’s natural mechanical stress distribution system. This philosophy prompts the use of modern
methods of caries detection for early accurate minimal intervention in the caries process. This helps to preserve internal
mechanical structures within the tooth that is vital to its long-term mechanical viability. The mechanical insult on the tooth
leads to weakening of the healthy tooth complex as well as loss of tooth structure. When the forces exceed the clinical
parameters, the tooth starts to breakdown leading to ultimate fracture. The article also emphasizes on the various treatment
modalities and the use of minimally invasive and adhesive technologies to maintain the integrity of the tooth and protect it from
future damage. The prosthodontist should attain keen knowledge of the tooth and how it responds to the intraoral exertions.
Key words: Compression dome, dentinoenamel complex, tooth structure

The devastating effect on an individual due to the disability of eye leads to physical and psychological trauma. The repair can
be performed with the help of rehabilitation done through ocular prosthesis which can regain the lost confidence improving
ones appearance. The prosthesis available is of different shapes, sizes, and color and of both the left and right sides. Stock
eyes are not closely adapted to the socket, hence does not work hand in glove at the required site. Moreover, they may also
cause irritation and laceration and hence attracts infections. The customized stock prosthesis, on the other hand, is more
closely adapted to the socket tissue bed, and retains movement with the movements of the residual musculature in the socket
bed. Furthermore, color can also be matched with the other natural eye. Hence, in this case report, as the previous stock eye
was causing great discomfort to the patient and was unesthetic, an innovative technique has been described in which muscle
molding of the stock prosthesis has been performed to customize the fullness and support for better esthetics.
Key words: Eye prosthesis, rehabilitation, muscle molding

In today’s society, where appearance of one’s teeth has become a concern. People are giving more importance to a healthy
and attractive smile. With the advancements in the area of cosmetic dentistry, the dental professionals have been offered new
opportunities in conservative and esthetic restorative procedures. Porcelain veneers are one of the most esthetic, durable
conservative, and biocompatible anterior restorations. These are excellent alternative to full crown preparations, main advantage
being the preparation limited to enamel only. This case report describes using indirect porcelain laminate veneer technique for
a patient with esthetic problem related to generalize diastema in upper front teeth. Beginning with esthetic gingivectomy and
ending up with bonding of laminates, a complete satisfying result was achieved.
Key words: Dental esthetic, dental veneers, gingival depigmentation

Dental sleep medicine involves the use of oral appliances (OAs) designed to prevent retroglossal collapse in sleep-related
breathing disorder (SRBD) in which there is partial or complete blockage of the airway during sleep. Although little or no
air is flowing, the person continues to attempt to breathe. The cessations in breathing last for >10 s/episode, but can also last
over a minute and frequently occur multiple times during sleep which leads to deprived sleep quality and a drop in blood
oxygenation levels over a prolonged period. Dental sleep medicines involve various OAs include mandibular advancement
devices, TRD, and membrane funnel oral shields. These devices are used primarily in patients with SRBD such as mild-tomoderate
obstructive sleep apnea (OSA), continuous positive airway pressure (CPAP) intolerant OSA, and primary snorers.
OA is preferred by patients as compared to CPAP even though they are partially effective. Although the effect is lesser as
compared to CPAP, the improvement in sleepiness, blood pressure, and overall quality of life is similar. Dental sleep medicine
offers a better treatment modality in patients with SRBD, as the primary treatment option.
Key words: Obstructive sleep apnea, sleep medicine, sleep-related disorder