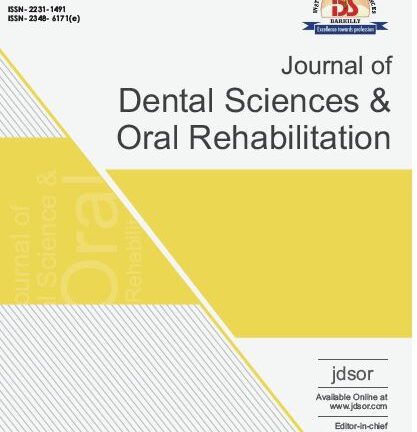 Introduction: India is in a state of demographic transition with a geriatric population of about 80 million, which constitutes
7.2% of the total population. Poor oral health exerts a negative impact on the quality of life of geriatric population. Hence,
the present study was conducted for the assessment of the impact of oral disease on daily activities and quality of life among
the institutionalized elderly in Bareilly city. Materials and Methods: For the present study, a total of 100 patients were
purposively selected from two old age homes through convenience sampling technique. Basic oral health survey form (1997)
was used to assess the oral health status of the subjects and oral health-related quality of life using short version of oral health
impact profile (OHIP-14). Statistical analysis was done using SPSS, 16. Independent t-test and ANOVA test were done to
determine the relationship between the groups.

Results: Independent t-test revealed that the presence or absence of grossly
decayed teeth, chronic periodontitis, based on edentulism, and remaining sound teeth status produced no significant differences
in any of the domains. Females experienced greater impact of oral diseases than males in mean OHIP-14 score; however, it
was non-significant (P = 0.45).

Introduction: Obesity and underweight are two growing paradox problems in today’s world. The global disparity in terms of fat

and hungry zones is the most visceral way, in which this inequality is lived, felt, and seen. Body mass index (BMI) is normally

used to describe of the level of fatness. Orthodontists frequently deal with children and adolescents for growth modulation therapy.

Purpose: The purpose of this study was to investigate whether the increase or decrease in BMI influences the skeletal maturation

Group III (overweight), and Group IV (obese) with 25 subjects each and of 14–17 years of age were studied. Each subject’s lateral

was run to determine the relationship between BMI and CVMI. Linear regression and ANOVA was performed for finding the

regression correlation between the BMI and CVMI.

with P < 0.001 (two-tailed). ANOVA test was used to find the regression correlation between BMI and CVMI, in which the beta

Conclusion: There was a significant positive linear relationship between CVMI

and BMI, where an increase in BMI is likely to affect the CVMI and thereby the skeletal maturation.

Knowledge, Attitude, and Practice of Hand Hygiene among Medical and Dental Undergraduates of Bareilly International University: A Crosssectional Survey

Background: Hand hygiene is of utmost importance for the prevention and dissemination of antimicrobial resistance associated with health-care infections. Among interdisciplinary undergraduate students in healthcare, the definition of hand hygiene needs to be discussed.

Materials and Methods: A cross-sectional observational study was conducted among the medical and dental undergraduate students of Bareilly International University. The questionnaire was adapted from the WHO hand hygiene awareness questionnaire for health workers, consisting of 13 questions and was distributed in print formats. P-value was calculated using Chi-square test. P = 0.05 or less was used as cut-off level for statistical significance.

Conclusion: None of the medical and dental students were fully aware of hand hygiene knowledge , attitude, and practices and the risk of infection associated with health care has increased.

The Assessment of Color Stability among the Four Base Resins in Different Edible Staining Solutions: An In vitro Study

Aims and Objectives: The soul aim of this study is to assess the changes in color of different brands of commercially available heat cure denture base resins (Trevalon, DPI, Pyrax, and Ivoclar) processed by conventionally in long curing cycle and processed in injection molding flasks (Ivoclar) and the samples were compared by exposing them to various food beverages.

Materials and Methods: Four varieties of heat cure base materials, namely, IVOCAP (HI), Trevalon (HI, DENTSPLY, Gurgaon [India], Pyrax [Roorkee, UK], and DPI [Dental Products, Mumbai]) were taken to prepare the desired samplings. The size of each cubical sampling was 20*20*2 mm. A total of 64 samplings (F) were prepared and out of which 48 samples were processed by compression molding technique using heat cure denture base resins Trevalon (HI, DENTSPLY, Gurgaon), Pyrax (Roorkee), and DPI (Dental Products, Mumbai). Rest, 16 samplings were set in special flasks with the injection unit (Dentsply). Injection of condensed heat-polymerizing resin was completed under a pressure of 6 × 105 N/m2. The pressure was maintained during a 45 min polymerization in hot water (100°C). All the samples are marked by their company name as I – Ivoclar, P – Pyrax, T – Trevalon, and D-DPI.

Results and Statistical Analysis: The data were subjected to one factor analysis of variance and the significance of mean difference between (inter) the groups was done by Turkey’s honestly significance difference post hoc test. It was observed that significant changes in all the denture base resins were seen when observed after a period of 7–28 days.

Efficacy of Silver Diamine Fluoride in Management of Caries: A Narrative Review

Dental caries is a microbial disease of the calcified tissues of the tooth, characterized by demineralization and leading to cavitation and is generally irreversible. Early involvement of pulp is associated with pain and loss of teeth as well as has negative impact on the quality of life. Hence, it is recommended to focus on preventive measures to limit the discomfort caused by caries. Silver diamine fluoride is one such medicament used to prevent and arrest dental caries and also helps in overcoming dentinal hypersensitivity. It is colorless or blue-tinted (which has advantage of arrest), odorless liquid composed of fluoride, ammonium, and silver. It is easy to use, efficient, accessible, cost effective, time saving, and patient centered.

Mobile Phones: A Potential Source of Nosocomial Infection in the Hands of Health care Workers – A Narrative Review

Cell phones are nonmedical portable electronic devices that are widely used by the health care workers. It remains in close contact with the body but not cleaned properly, as health care workers’ may not wash their hands as often as they should and there are no guidelines regarding the cleaning of mobile phones. These mobile phones can contain multiple potential pathogens and become an exogenous source of nosocomial infection for hospitalized patients and also a potential health hazard for the family members and mobile phone owners. Studies have reported the presence of Methicillin-resistant Staphylococcus aureus, vancomycin-resistant Enterococcus spp., Clostridium difficile, Acinetobacter spp., and norovirus. Colonized micro-organisms in the devices of health-care personnel may be transmitted to patient even if patients do not have direct contact with mobile phones. Nosocomial infection may be caused in patients with weak immune system. Hence, to prevent bacterial contamination of mobile phones, hand-washing guidelines must be followed by all the health-care workers and technical standards for prevention strategies should be developed. Regular disinfection of mobile phones is an important step in preventing cross infection.

Gingival recession is the most common problem affecting mostly the middle and older age patients to some degree. It may affect the healthy persons with good oral hygiene status as well as the persons with untreated periodontitis. Gingival recession can cause dental hypersensitivity, root caries, and unesthetic appearance. Various periodontal surgical procedures are available which includes coronally advanced flap (CAF), and this procedure having some advantages and disadvantages. To enhance the clinical outcome of such surgical procedures, different regenerative materials have been combined with it. In the present case report, we aimed for the root coverage in Miller’s Class II gingival recession by means of CAF along with titanium platelet-rich fibrin membrane.

Various types of cantilevers for fixed implant-supported prostheses have been suggested in the literature. The current paper presents a case report of wing cantilever prosthesis design in anterior mandibular right short span edentulous area. It is computer-aided design and computer-aided manufacturing (CAD-CAM) implant titanium milled metal ceramic restoration. The system has used dental EXOCAD software. The present paper also shows the clinical steps for preparing a titanium screw retained crown for restoration of an anterior single implant right from starting implant surgery to finally prosthesis fixation. Milled titanium implant coping framework is précised, light weight, and biocompatible. The CAD/CAM fabrication is more accurate than the lost wax/casting technique which is based on minimal human intervention and bypassing several fabrication steps such as waxing, investing, casting, and polishing. It also exhibits better bonding strength to ceramic. A small wing cantilever implants prosthesis, a good prosthetic option in mesio-distal length discrepancy. On follow-up, there is no bone loss after 6 months.

Enhancing Esthetics by the Carting of the Melanin: A Case Report with 1-Year Follow-up

Esthetic smile is always desired by every individual and right amount of exposure, color and contour of gingiva plays a major role in achieving it. Gingival hyperpigmentation occurs by excessive accumulation of melanin. The degree of clinical pigmentation is depends upon melanin amount i.e. total number of melanosomes present in the suprabasal layer of the epithelium. Melanin pigmentation affects patient’s esthetics, it is not a medical disorder. There are various procedure for the correction of gingival depigmentation in which split thickness removal of gingival epithelium is carried out. Conventional scalpel surgical technique provides the maximum control over the instrument and therefore adequate depth penetration can be easily achieved during the surgical procedure. The scalpel surgical technique is simple, efficient, economical,convenient to perform and the need of sophisticated instrument is also not required.The present case report therefore describes conventional scalpel surgical technique of gingival depigmentation for the correction of patient’s esthetics with 1 year follow-up.

Pinhole Surgical Approach in the Treatment Modality of Gingival Recession: A Case Report